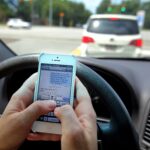 The UK’s Department for Transport has issued a study on February 25th, 2015, revealing that the number of drivers who use their mobile phones for texting and accessing social media in England and Scotland is larger than the number of those who use their phones to make calls.

According to the study, 1.6 per cent of all drivers in England and Scotland (470,000 individuals) were observed using a hand-held mobile phone while driving.

A higher percentage of drivers were spotted using their mobile phones when stationary (2.3 per cent).

In 2009, the same survey revealed that 1.4% of drivers were using a mobile phone. This suggests an increase by 0.2 per cent (roughly 59,000 individuals) of people who use their mobile phones while driving.

Commenting on the survey, Road Safety GB, a national road safety organization operating across the United Kingdom, said that “tackling mobile phone usage must be a government priority for 2015. People must have the fear of being caught increased as we believe this is the only viable deterrent”.