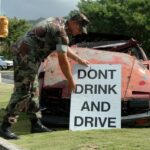 Myths and Facts about DUI

1-      The type of alcohol you consume does not really matter. In fact, the amount of alcohol in your body is what determines your level of impairment.

2-      A person can become sober again only after waiting for a sufficient amount of time after consuming a large quantity of alcohol; all other activities aiming to reduce intoxication (such as drinking coffee or showering) are not based on any scientific evidence.

3-      In the United States alone, 27 people are killed every day on average in car accidents caused by driving under influence. Moreover, roughly one person is injured every 90 seconds due to a drunk driving crash.

4-      Some drivers will drive roughly 80 times under the influence of alcohol before being arrested for the first time, and 50 to 75 per cent of people who have had their licenses revoked due to DUI still drive illegally.

6-      When it comes to children, in 2010, 211 children were killed in car accidents caused by intoxication. 62% of those children were riding in the car with the intoxicated driver.

7-      Children and teens who consume alcohol are 7 times more likely to be involved in car accidents caused by driving under influence.