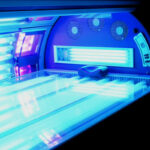 Phototherapy is a controversial treatment.

Phototherapy has been used for medicinal purposes since the 19th century but disappeared for a little while before emerging once again in the 1980s.

The technique, employed in psychiatry has given excellent results when employed to treat seasonal depression but remains controversial and frowned upon by several scientists.

It isn’t until after the year 2000 that the entire medical and psychiatric community began to praise phototherapy, describing it as extremely efficient.

The principle behind phototherapy

Phototherapy incites hormonal actions: By focusing the light towards the retina, it creates an immediate response on the pineal gland (epiphysis), located in the brain.

The purpose of this is to reset the body’s biological clock to compensate for the lack of natural light (in winter, notably).

The epiphysis is in charge of producing melatonin, known as the sleep hormone. Melatonin is in charge of regulating the biological rhythm and the entirety of the body’s hormonal secretions.

Melatonin, a hormone that’s usually produced during the night, plays a fundamental role in the alternation between wakefulness and sleep. It is usually secreted in the dark and its production peeks in the middle of the night then decreases gradually as more light appears.

When it is produced during the day, the person would feel sleepiness and, in general, a disturbance in its production as well as a series of disorders, including seasonal depression.

Effect of the light

The light used in phototherapy would interfere in the secretion of melatonin and serotonin (a neurotransmitter) which interferes in the hormonal secretions of the epiphysis, linked to the amount of light caught by the retina.

The inhibition of melatonin would naturally encourage wakefulness and acute vigilance in addition to improved general energy.

The light used in phototherapy covers the entirety of the luminous solar spectrum visible to the human eye.

The very short infrared rays and very long ultraviolet ones do not enter in the composition of the light employed in phototherapy.

A 10 000 lux lamp is used. The lux is light produced by a single candle placed a meter away. Positive results have been observed with lamps superior to 2 000 lux, but better results were observed with higher luminous sources.

Here is an example to compare normal lighting with phototherapy lighting: A classical well lit apartment offers the eye 400 lux, while daylight during midday in the summer reaches 50 000 lux.

Phototherapy is extremely efficient to fight off seasonal depression but it may also help with:

–           Chronic fatigue (chronic fatigue syndrome to be precise. It is a case so complex that phototherapy alone cannot cure and no other treatment exists, until now)