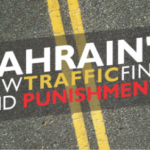 The Kingdom of Bahrain has issued a new traffic law to replace the country’s traffic legislation dating back to the 1970s.

The new law has become applicable since February 8, 2015. It aims at reducing accident rates and enforcing speed limits. Violations such as jumping red lights, using mobile phones while driving or not wearing seatbelts are punishable by a series of fines or prison sentences depending on the severity of the violation and whether or not it leads to injury or death.

Violators are also punishable by a points system under the new law, by which a series of points is added to the individual’s traffic record after each violation. If any driver cross the 20-point limit, their license will be suspended for three months. The second or third time a driver crosses the 2-point limit, their license shall be suspended for one year. Permanent suspension is the penalty for crossing the limit for the fourth time.

Bahraini authorities have launched many awareness campaigns to alert people of the new law and to stress the importance of road security. Bahrain’s Interior Minister Sheikh Rashid bin Abdullah al Khalifa claimed that speeding incidents have dropped by 90% since the introduction of the new law.