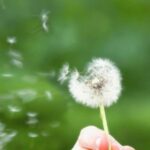 Summer is unofficially on, and that means three months full of sun, heat -- and allergy triggers. The fully bloomed trees and green grass may be nice to look at, but the pollen they harbor can bring allergy sufferers misery during the spring and summer months. But it's not just that ubiquitous powdery substance that can trigger sniffling, sneezing and itchy eyes during the hotter months. Experts say the allergy triggers on the following pages can be more common during the summer.

No matter what the season, pollen is in the air, ready to set off allergy attacks.

Allergy experts say of the summer allergens, pollen is the most common and affects the most people. While it’s not possible to avoid pollen entirely,  Dr. Clifford Bassett, a clinical assistant professor at NYU Langone Medical Center, offered a number of tips for minimizing its effects.

“Avoid bringing in those pesky pollens and mold spores into your home via an air sucking fan, especially during the allergy season if you are a sufferer,” he said.

He also recommends exercising indoors on days when pollen count is high, which is often on dry, warm and windy days. Levels are also typically highest in the mid-day and afternoon.

People should also wash their hair at night to eliminate pollen and change clothing before getting into bed. Additionally, keep windows closed while driving and keep air conditioners running on the ‘re-circulate’ setting, Bassett added.

Outdoor mold is the culprit behind many allergic reactions starting in late summer and fall when there is a peak in the amount of some types of mold spores, according to the Asthma and Allergy Foundation of America.

There are many types of mold, but only a few can trigger allergies, the academy says on its web site. Mold can also trigger asthma and while certain types can be especially problematic at certain times of the year, mold can be a nuisance all the time.

The academy suggests that people with mold allergies avoid being outdoors when mold counts are high, and also wear a mask when mowing lawns or working around plants.

To prevent indoor mold, take steps to get rid of any moisture or dampness, such as repairing leaks and using dehumidifiers.

“Stings are much less common, but can be more dangerous,” said Dr. Nelson, an allergist at National Jewish Health in Denver. “People can have systemic reactions, which can be life-threatening. A number of people die each year as a result of allergic reactions to stings.”

Bees, wasps, hornets and yellow jackets are most active during the late summer and early fall, and fire ants are active throughout the year in some parts of the country, the ACAAI says on its web site.

Sunscreen allergies are also not common, especially since most of the available sunscreens are hypoallergenic. However, reactions can happen.

“It can be a blocking agent or the fragrances”. Reactions can also be caused by the parabens, which are chemicals used as preservatives.

Allergic reactions to food can happen at any time, but for some people, summer fruits and vegetables can be anything but juicy and delicious.

Some people who are allergic to certain pollens can suffer from a cross-reaction after they eat certain foods, such as melons, apples and celery, according to the ACAAI.

The condition is known as oral allergy syndrome and symptoms include itching, tingling or swelling of the mouth.

Unlike serious reactions that can occur with food allergies, oral allergy syndrome is rarely life-threatening. People can either put up with the symptoms or avoid eating the offending food.