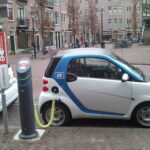 Pros and Cons of Electric Cars

The debate over "green cars" is far from over and we even say that we've seen nothing yet. Some are against the idea, saying that we still lack the infrastructure and the knowledge to enable us to enter this field without fear, while others see this as a gripping technology that can only be positive, especially because of how it is connected to fuel consumption and environment protection. Here are the main pros and cons of green cars.

Even though they are both ecological, hybrid and electric cars are not one and the same: hybrid car are run by an electric engine as well as a fuel-running thermal engine.

Obviously the fact that these cars are more in harmony with the environment and are less polluting puts them at a great advantage. Indeed, less greenhouse gases will be emitted into the air. During the Urban riding mode, some hybrid vehicles may run entirely, using the electric engine. By reducing the use of the fuel engine the car will consume less fuel, by an estimated 10 to 50%. When it comes to maintenance and even though the car’s system is rather different from traditional cars, maintaining it does not differ that much. Hybrid cars contain less parts and would then require less maintenance, less wearing and less expenses. This kind of vehicle is agreeably silent, seeing as the engine does not produce any sound.

Hybrid cars are anatomically interesting seeing as they are equipped with a gas tank, so you needn’t fear a power failure. Finally and most interestingly, in my opinion, the best part about a green car is the personal challenge it entails: by attempting to keep it running on electricity, by controlling the drive and by attempting to understand how this brilliant mechanism works, you’ll have so much fun, in addition to saving a lot.

One of the primary cons to owning such a vehicle is its price. With all the researches done to constantly enhance these complex technologies, it’s small wonder these cars’ price is higher than that of traditional cars.

Even though hybrid cars save a lot inside the city, this is hardly the case when you hit the highway. As a matter of fact, it’s difficult to see how you’re saving fuel when you’re moving on the highway because the car would only run, using the thermal engine, there. The opposite applies in the city where the electric motor is put to much more use so it becomes apparent how much fuel is being saved, in comparison with traditional cars.

It’s also worth mentioning that pedestrians cannot hear the car coming, since it does not produce any noise. This may pose a threat if ever they do not look before crossing the street.

The biggest fear when driving an electric car is having power failure and not being able to go from there.

Electric and hybrid cars remain profitable if driven within the city. One must think, however, that most people who live in the city do not have access to external electric sockets to be able to plus and recharge certain vehicles. Seeing as it is extremely discouraged to use an extension cord, which would be extremely dangerous, the question of infrastructure is raised.