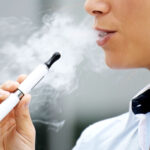 The E-cigarette: A gloriously bad idea?

All over the forums, it's spreading: E-cigarettes are the miraculous solution that would help everyone quit smoking! Or at least that's what commercial parties want you to believe. But with every passing day, the French health authorities and the World Health Organization recommend more and more caution.

It is estimated that half a million people smoke the E-cigarette in France, according to the manufacturers. The true breadth of this phenomenon remains hard to calculate because a considerable share of these purchases are completed over the internet and bought from foreign manufacturers.

Ever since public smoking has been forbidden, the E-cigarette seemed like the alternative to classic cigarettes: same look as the cigarette but instead emitting vapor, harmless to all those surrounding the smoker.

The E-cigarette reproduces the look and feel of the classic cigarette.

Inside this replica are: a battery, a microprocessor, a spraying tool and a filter containing a liquid to which can be added some nicotine or aromatic substances made of food additives or artificial aromas. With every puff, the blend mixed with the inhaled air is rendered into a vapor that mimics the cigarette’s smoke, and the smoker breathes it in.

The WHO has never advised the usage of E-cigarettes

E-cigarette manufactures generally describe it as a way of helping smokers to get rid of their dependence of tobacco. A few even went as far as saying as the WHO (World health organization) considers e-cigarettes as healthy and recommendable as the nicotine substitutes (nicotine gum, tablets and nicotine patches).

This recommendation is one that the WHO has never given. Dr. Ala Alawan, the assistant director general and head of the Non-communicable Diseases and Mental Health at the World Health Organization had declared: “The World Health organization does not possess sufficient scientific proof, enabling it to confirm the harmlessness and the safety of the product. The manufacturers that had publicized the contrary should take the information down from their websites and other information means. This also applies to every other indication that leads one to assume that WHO encourages E-cigarettes as an efficient and safe means to achieve smoking cessation. E-cigarettes has not yielded results as a nicotine-replacement therapy”

E-cigarettes: France is on its guard

The French office for the security of health products and the Health branch of Health have conducted a risk analysis in July of 2008. They concluded that E-cigarettes may contain chemical substances such as propylene glycol, a solvent with irritating properties or terpenique derivatives  that may lead to undesirable incidents should the smoker have a history of epilepsy.

Their conclusion differs from that of the WHO: “We await further information on this matter and until we are provided with it, no product of this type will be given a marketing authorization or a CE mark. The French office for the security of health products and the Health branch of Health recommend extreme caution to the users of E-cigarettes.” Women nursing their children were especially advised to take caution form smoking E-cigarettes because of the toxicity of certain materials and the absence of all data of their passage through maternal milk.

The French health minister, Marisol Touraine requested that the French office working for smoking prevention, carry out an investigation about these products. The report was handed in, in May of 2013 and on Tuesday, the group of experts gave the green light to the E-cigarette. The approval is under the condition that it remains controlled, as a safeguard, aiming notably to prevent it from being a door through which young people can have access to smoking.