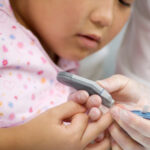 Signs and Symptoms of Diabetes

Symptoms in infants and toddlers

Early symptoms may not be as clear in infants and toddlers. It’s difficult to recognize thirst in young children who cannot speak. Regular growth spurts can also bring changes in appetite. In these cases, children may quickly progress to more serious symptoms before diabetes is recognized. One additional symptom found in those wearing diapers may be a fungal or yeast diaper rash that doesn’t improve with the use of medicated cream. The fungus or yeast flourishes in the sugar excreted in the urine. In older girls, yeast infections (for example, vaginal discharge or itching) may also be a symptom.