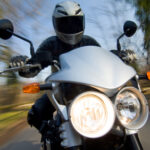 Highways and roads have proven to be hazardous for cars for many different reasons, much less for motorcyclists.

According to the National Highway Traffic Safety Administration, nearly 4,000 deaths have occurred in 2011 involving motorcycles. Below are some tips for motorcyclists to avoid accidents and drive more safely on the roads:

–          Adjust the mirrors in order to cover the complete width of the lanes to the side of the driver.

–          Make sure you are visible to other drivers: wear colourful clothing, always use your headlights, don’t ride in blind spots, etc.

Motorcycles are cool, but at the end of the day they are not as safe as cars, despite the fact that motorcyclists can travel as fast as cars sometimes. Meanwhile, they lack the basic safety features available in cars, such as exterior frames, seatbelts, airbags, etc. Instead, the force of the collision during an accident is borne directly by the rider’s body, and therefore the probability of death or serious injury is much higher for motorcyclists.

However, if all safety precautions are taken, there is not much to fear. Driving slowly, wearing proper riding gear and avoiding hazardous weather conditions can make a big difference in making the roads safer for motorcyclists.