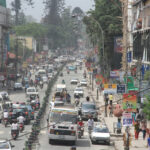 Road safety in Nepal is a major challenge and in some cases downright dangerous. Be prepared to be thrown out of bus seats as the vehicle ploughs through potholes and take note of upturned lorries on hairpin bends and holy cows that loom out of nowhere. This is a place where travel is definitely not for the faint-hearted but an experience in travelling.

There are a few roads in Nepal that are badly maintained with massive potholes and many are constructed round the terrain which includes winding roads, hairpin bends and steep precipices with no safety barriers. Combine this with no street lighting in rural areas and in areas of Kathmandu and there is a cocktail with danger written all over it, particularly at night.

Driving during darkness is particularly dangerous in Nepal, and hitch hiking is not advisable as the drivers of lorries. Some cars are often unqualified, and lorries carry dangerous loads which are poorly loaded.

Expect to be overtaken by cars and lorries on bends and if you are driving be vigilant.

Pedestrians account for 40% of road fatalities in Nepal. Pavements are either non existent or pedestrians do not have priority.