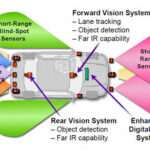 Even while driven by a computer, cars will crash. However, human error is almost always the cause…

Legal in the United States

The autonomous car is no longer a dream in four US states (California, Florida, Nevada and Michigan), but rather a reality. Dozens of vehicles driven by computers are legally authorized to circulate along the road. In order to find out whether self-driving cars are really the future of automobiles and whether security is at risk, it’s time to do the sums.

Accidents are caused by other drivers

Google, one of the world’s most important promoters of the self-driving car, reacted to the stats. Dozens of Google cars have been circulating in the US since 6 years. According to the manufacturer, the self-driving car is reliable, but humans are not. Googles cars circulated for more than 1 million kilometers across the United States, only being implicated in 11 accidents, none of which are due to computer error. According to Google, all were caused by careless drivers. There are, of course, those who use their mobile phones while driving, as well as those who run stop signs. There was even one driver who was reading behind the wheel and another who was… playing the trumpet while driving.

There we have it then: at the end of the day, even autonomous cars cannot prevent accidents provoked by third parties, especially if they are trumpet players.