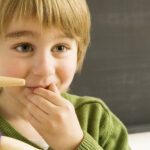 How do children think of lying?

If one’s to believe old saying then out of the mouths of babes and sucklings come grains of truth, but lies too. White or not, when children tell lies, they are usually, as Jean Cocteau describes them: “lies that never fail to tell the truth.”

There are three reasons that make a child lie: the fear of being punished, the pleasure in imagining and the desire to seem important to others. Children often lie unconsciously and not in the aim of deceiving. They do so spontaneously without stopping to think of the consequences, especially before the age of 4. However, infantile innocence does not last long and the child who slowly acquires reason also acquires the ability to differentiate between what is right and what is wrong, what is real and what is not and to understand that his own desire seldom matches what society allows. This is how the child truly becomes capable of lying, that is to say, the same way parents and adults lie. A child telling a lie often hides a truth that he cannot express in a way that’s different from the made-up story.  This is a truth that may sometimes be difficult for the parents to hear. Lies allow the imagination to grow and the person to dream. The child invents something like a fable to brighten his daily life.

Where to draw the limit?

The age in which a child learns to make up the difference between what’s real and what’s not varies greatly. WHen lies become a means of communication, a way of living that are permanent and far from being occasional, it’s then that one starts to worry. In most cases, it is not the kind of lies that should be monitored but the quantity and the frequency in which the child lies. Constant or highly frequent lying should push the parents to consider why their child conceals the truth so much. It is often the case of an attempt at an unconscious concealemnt of a problem, a feeling of unease. Parents should then attempt to understand the emptiness that their child feel and progressively help them make out the difference between his desires and the real world. A lack of lying must also alert parents. Usually parents feel pride when their children do not tell lies, but that is actually an indicator that the child has not yet created his own personal space and his secrets. It’s the case of a child that has not yet been able to tell the difference between himself and others, and has not yet been able to detach himself from his mama and papa.

The parents’ role is evidently a crucial one in the process of learning the difference between what is right and what is wrong. Before telling the child off for lying, parents should consider things and notice how the child reacts when they’ve caught him in the lie. Parents should not worry or feel betrayed by their children lying because the child builds up his own personal space, a secret world halfway between reality and dreams. It is a world in which he can lay down the emotions and feelings that he does not wish to divulge to grownups out of embarrassment of jealousy.

Before the age of 8, it is easy for parents to repair the damage done by the act of lying. But starting the age of 10, children are well able to tell between what is real and what is not, and the act of lying is them a completely conscious act. Parents should tell their children that telling the truth is the right way to go and avoid punishing their children for lying. Quite the contrary, they should encourage dialogue to limit lying. If the child lies constantly, the situation would then be much graver.