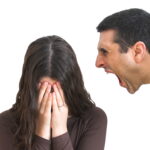 It is the least common of all types of violence and the most difficult to identify. Belittling, humiliation, forbidding, controlling, threatening, intimidating... Psychological aggressions leave no trace upon the victim’s body, that’s not to say that it doesn’t hurt and terrorize them. Far from being harmless, this form of violence deeply affects one’s self esteem and health.

Imposing their tastes and their opinions on their partner (taste in food, hobbies, company to keep, etc…), choosing in her stead (hair and clothing style), making important decisions without running things through with her, telling her how to act, bossing her around…

This is how the partner dominates his significant other and stops her from living freely. He says he know what’s good for her. She must do as he wishes and yield to his will. This is how psychological violence begins.

Psychological violence includes denigrating the partner, in front of others. Everything can be belittled: The partner’s intellectual capacity, her ideas, her emotions, her physical appearance, her relatives, her past, the way she raises the children, keeps the house, cooks… For instance: “You won’t be able to do it, you’re not good enough”, “Are you crazy? You’re speaking nonsense”, “You keep crying and moaning”, “Do you know what you look like?,” “You’re a good for nothing”. The partner’s enthusiasm, her good mood, the manifestations of affection she displays may also be targeted. He shows his partner that she is worthless and projects an image that she is an incompetent loser.

Psychological violence is also expressed through insults, swearing, crude speech, and even humiliation: rolling of the eyes, turning his back on her, leering, spitting, burping, farting, etc. It can also be done through the constant interruption of his partner, not listening to her, ignoring her, refusing to speak with her for several days without giving reasons.

“If you loved me, you wouldn’t go to that meeting”, “you love your family more than you love me”, “your cousin has a bad influence on you”, “I don’t like you hanging out with your colleagues from work”, etc. Psychological violence includes jealousy-related actions, based on wanting to control the partner, such as: forcing the partner to always be with him and only with him, waking her up in the middle of the night, forbidding her from seeing her close ones, forbidding her from going out alone or from going to certain places, surveilling her phone calls, her text messages, her mail. The control done by the partner may lead to taunting: questioning her repeatedly, accusing her, going to her out of the blue or calling her constantly to check her schedule, etc.

Psychological violence includes making threats, for instance cutting her money off, threatening to hurt her close ones and children, to abduct them, to hit her, to kill himself. “Shut it or I’ll strangle you”, “If I ever see you with her again, you won’t what will happen”, “If you go out, you’ll pay”, “Be careful what you do, I’m capable of everything”, “If you walk out that door, you’ll never see the children again/ I’ll kill the dog/ I’ll beat you up/ I’ll kill myself”.

Intimidating actions are also a part of physical violence: Glaring at her, yelling, shouting or on the contrary, speaking very low, speaking in a mellow tone, whispering to scare her, destroying her belongings, slamming doors, breaking items at home, driving extremely fast, banging on the walls or doors, mistreating pets, etc. He partner would be trying to prove his strength and would then be warning his partner that is capable of going even further than that.